… or what a restaurant server can teach us about selling 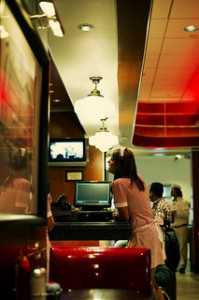 Food servers rely on tips to supplement their wages. Because US minimum wage legislation does not apply to this class of employee, researchers estimate that an 8% tip is required to break even with normal minimum wage guidelines. Clearly, if you are working in this field you may be very interested in learning the subtle techniques of impression management to improve the tip amount. Not surprisingly, these same techniques will work for everyone else as well!

Studies conducted on customer tipping behaviour have found that several factors can affect the tip amount, including environmental elements like:

But for the most part, these elements are outside of the server’s control. What is within their power is how they interact with the dining party. Studies have found that simple things like:

All of these actions can significantly increase the tip amount received!

All of these actions can significantly increase the tip amount received! This list of what’s in a server’s control are all designed to do one simple thing: INCREASE THE CUSTOMER’S LIKING FOR THE SERVER.

A 2007 article by John Seiter of Utah State University in the Journal of Applied Social Psychology detailed a study in which 94 couples at two casual dining restaurants were observed to verify a hypothesis: that food servers will receive significantly higher tips when they compliment their customers than when they do not.

… customers who were complimented left almost 13% more in tips …

The customers who were complimented left almost 13% more in tips that those who were not complimented! Not too bad for a simple gesture anyone can do!

Your clients want to like you, and will reward you if they do! A simple, sincere, compliment may be all you need to do to get the ball rolling!