Leadership. Some people occupy the role, some aspire to it, others have it thrust on them. Regardless of whether your role as a leader was given, earned, or compelled, your ability to fulfill leadership’s demands, earn the trust of your people, and effectively command may remain elusive. While many people struggle with their role as a leader, a select few can effortlessly wield its power, and inspire people to contribute wholeheartedly to missions and movements that can change the world.

What are the Crucial Characteristics of a Leader?

In studying great leaders, I believe that they all share some common traits. Here are the four essential characteristics of a leader.

1) Knowing What the People Want

Great leaders know their people’s deepest needs, desires, fears and aspirations, perhaps better than their people know it themselves.

The foundational characteristic of a leader is a deep understanding of their people. Great leaders know their people’s deepest needs, desires, fears and aspirations, perhaps better than their people know it themselves. This is especially true if leaders ascertain what the current situation may transform into within one, five, or ten years, and how that future state will alter their people’s agenda. Abraham Maslow’s theory on the hierarchy of human needs gave us a simple framework for categorizing human needs. Although the categories of human needs, wants, and desires at their root level are stable (e.g. food, safety, love, family, friendship, self-esteem, achievement, creativity), how one fulfils these needs may change with time. The mechanisms and results that achieve these goals today may not be relevant for the decade ahead. Leaders need to understand that they must lead for the present and the future at the same time.

I pledge you, I pledge myself, to a new deal for the American people.

In 1932, Franklin Delano Roosevelt accepted the Democratic Party’s nomination as its candidate for president of the United States. In his acceptance speech, Roosevelt made the following promise, “I pledge you, I pledge myself, to a new deal for the American people.” At the time, the US was deeply mired in the Great Depression, with industrial production halved, 15 million people (25% of the labour force) out of work, bankruptcies skyrocketing, and agricultural production (reeling from the drought) seeing prices for produce decimated.

Roosevelt’s promises led to him winning by a landslide, and the ensuing years saw the creation of an “alphabet soup” of federal agencies that created programs to protect and ensure emergency relief, agricultural production, banking reform, worker and union protection, amongst many others. This era set the model for the government’s involvement in the economic and social well being of the people. Roosevelt was re-elected two more times, the only president to ever be elected to three terms in office.

Imagine being kidnapped, blindfolded, stripped of all your possessions, taken to a remote area, and left there with a single mission: find your way back to civilization. If your captors were to give you one tool as an act of compassion, what would you ask for? I would want a detailed topographic map. Great leaders are keenly aware of the current state of the macro-forces “map” in six key areas: social, technology, economic, environmental, political and legal.

These six macro-forces categories are in a constant state of flux, with each having three states of being on a time axis: a past, present, and future, and two states on a focus of analysis axis: micro and macro. Here are some macro, past state, examples:

… sitting still is not a strategic option.

Each of these macro-forces, acting alone or in tandem, steadily erode your current landscape while building new terrain elsewhere. Whether these transformations result in opportunities or threats are entirely dependent on your strategy. But one thing is sure; sitting still is not a strategic option.

3) A Knowledge of History

Those who cannot remember the past are condemned to repeat it. – George Santayana

It is almost a certainty that the situation you are facing today has been faced countless times before by other leaders. So instead of trial and error, leaders should be able to recall similar circumstances other leaders have encountered and then adapt these learnings to the current situation. As philosopher George Santayana states, “Those who cannot remember the past are condemned to repeat it.” But, it is surprising how often those in leadership positions are oblivious to the historic parallels they could call upon to understand their current situation.

Here’s an example. A spectre that still haunts humanity is that of genocide. Although maniacal leaders have used genocide as a weapon throughout recorded history (e.g. Genghis Khan, Tamerlane, Leopold II of Belgium, Adolph Hitler), we are still seemingly surprised when these atrocities occur in modern times. Recent examples include the government led programs against the Tutsi in Rwanda and the Rohingya people in Myanmar.

According to Genocide Watch, a government-led systematic genocide goes through ten common stages. They are:

While you and I may not be tasked with preventing a future genocide, it may be comforting to note that each of the stages above has a corresponding, historically proven, preventive measure that can be applied to stem the hate virus from spreading. As an illustration, to prevent Stage 2 – Symbolization from taking root, Genocide Watch recommends the following:

To combat symbolization, hate symbols can be legally forbidden (swastikas in Germany) as can hate speech. Group marking like gang clothing or tribal scarring can be outlawed, as well. The problem is that legal limitations will fail if unsupported by popular cultural enforcement. Though Hutu and Tutsi were forbidden words in Burundi until the 1980s, code words replaced them. If widely supported, however, denial of symbolization can be powerful, as it was in Bulgaria, where the government refused to supply enough yellow badges and at least eighty percent of Jews did not wear them, depriving the yellow star of its significance as a Nazi symbol for Jews.

Although leaders may sometimes be called upon to create a radically new strategy no has ever seen before, most of the time, the circumstances only require an adaptively innovative strategy based on a previous precedent. For every situation a leader faces, it is highly likely that someone has already chartered a successful course through its obstacles.

If you ask leaders whether they consider themselves strategic thinkers, most would say yes. But if you probe further, you may find that the resulting product of their strategic thinking wants for the core kernel of strategy.

In a seminal article titled Are you sure you have a strategy? in the November 2001 issue of The Academy of Management Executive, Professors Donald C. Hambrick and James W. Fredrickson posited that every successful strategy has five parts, which are:

These form a “strategy diamond,” which itself is derived from a planning process which includes the following:

Here is how that would look: 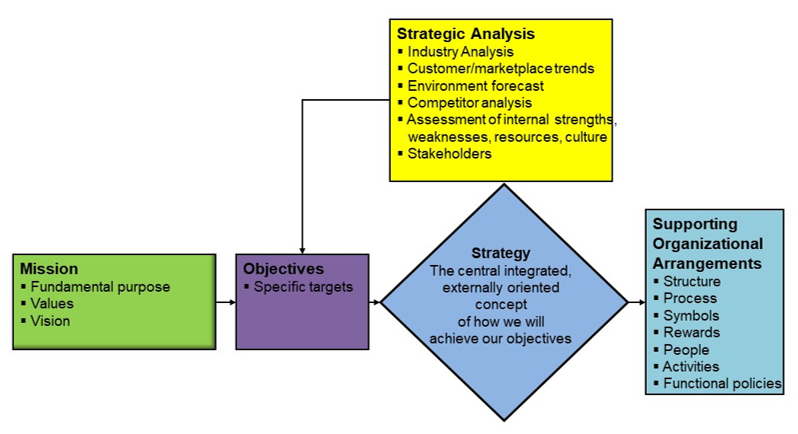 What is illustrated above is effectively a leadership lens, and different lens configurations will result in a variety of approaches and resulting outputs even for the same set of observed facts and assumptions. The choices made in each one of these sections will result in dramatically different approaches to the current situation and the resulting game plan to win – the strategy itself.

Hambrick and Fredrickson call this lens the strategy diamond, which would have the following components: 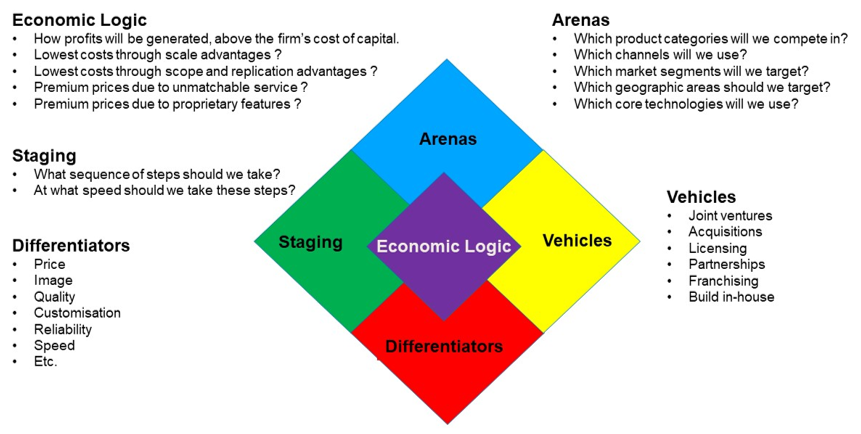 In the 1950s, Sam Walton the founder of Walmart decided that his company’s arena would be that of the small towns of rural America, skirting the ruthless competition that was occurring between the likes of Sears and K-Mart in the big cities. By bringing sophisticated big city retailing to rural America, Walton effectively had these markets to himself, allowing him to build a war chest of both capital and expertise to enter the big metro markets at a time of his own choosing. (In 2005, Sears and K-Mart merged, but by 2018 the combined company was filing for bankruptcy.)

On another front, Walmart made a considerable push to ruthlessly drive costs out of its supply chain, including such innovations as deploying a company-owned satellite network to help (amongst other things) manage their freight logistics. These actions completely re-wrote the economic logic of their operations and gave the company a massive advantage over their competition.

Let’s use iconic Swedish furniture retailer’s as an example to see what their strategy diamond would look like: 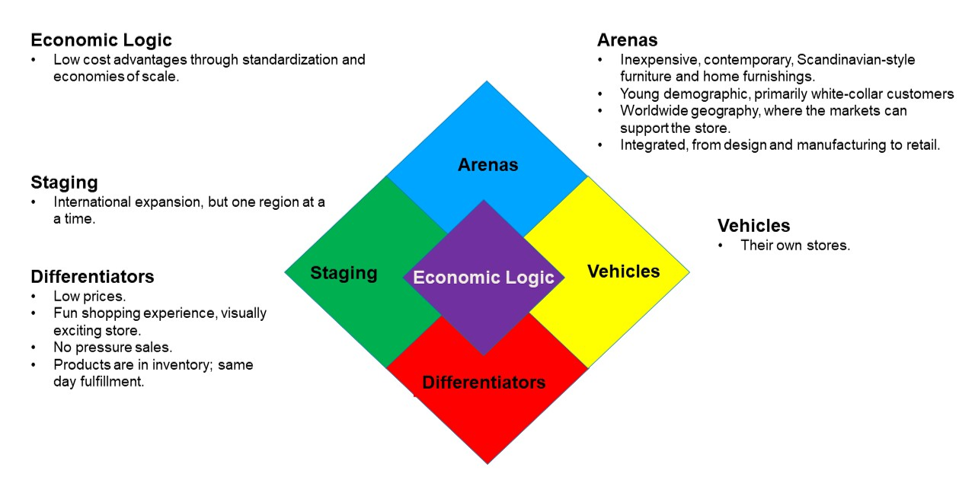 In each of the five strategy diamond components, IKEA has made clear choices, with each component’s decision set supporting all of the others. Competent leaders can clearly communicate the five dimensions of their strategy and the process for how they arrived at their conclusion.

Although there are many more characteristics of great leaders, I believe that these are the top four. Without these four elements as a foundation, even people with natural leadership skills will flounder. With these four elements in place, even immature, untested, leaders will have the potential for greatness unfurled before them.

This article was adapted from our new book, The 7 Essential Stories Charismatic Leaders Tell.

Here’s a portion from the book’s intro: Charismatic leaders seem to possess an effortless ability to influence, captivate, charm, and inspire people to action. Whether it is through grace, passion, or unshakable confidence, charismatic people can rouse the sentiments and energies of the people they touch. While not everyone can master charisma, there is one charismatic tool that any leader can learn — the power of storytelling; specifically, how to communicate a strategic narrative. When charismatic leaders wield captivating strategic narratives, their power is unstoppable.

Here’s what one reader said:

Beyond a typical leadership book! – As the title suggests, The 7 Essential Stories Charismatic Leaders Tell is a deep dive into the power of words and impact of strategically crafted narratives on organizations, their cultures, people and customers. This well-researched book is much more than the title conveys. It is also a rich exploration of 7 pillars of culture, with diverse examples that span human history. Filled with lessons in history, culture, language and leadership, this book goes beyond a typical leadership book. An interesting read for leaders and non-leaders alike!