Imagine that you are the owner of a highly successful orange juice manufacturer.  You have a nationally recognized PREMIUM brand, won numerous consumer awards, and have the thickest profit margins in the industry.  One day, after your annual operations review, your accountants come to you and say that their analysis has revealed that your brand’s juice concentrate per litre is significantly higher than your competitors.  By reducing the juice concentrate by a couple of percent you will be able to increase your profits by millions of dollars per year.

The problem is that this is your grandfather’s recipe and you don’t want to monkey around with a winning formula.  But you reluctantly agree that if a blind consumer taste test concludes that the new reduced formula “tastes” the same that you will go forward with the 2% reduction in concentrate.  A covert series of taste tests are performed, and the result is an imperceptible difference between the old and new formulas.  The new, reduced, formula is ordered into production, and immediately millions in profits are now diverted onto your bottom line.

The next year, the accountants come back with the same idea.  By reducing the juice concentrate by a couple of percent, millions more in new profits could be produced through the savings. Although hesitant, you agree to a series of covert taste tests, and the results are the same!  The difference between the 2 juice formulas is imperceptible.   The new recipe is ordered into production, and millions in new profits are yours.  And what’s more, is that you are still the national leader in your juice category!

Once again, the accountants are proven right!  Their tactics have produced multi-millions in savings!

… each year it seems to work.  UNTIL THE YEAR IT DOESN’T!!

Over the next few years, you agree to similar juice formula changes subject to the results of the taste tests, and each year it seems to work.  UNTIL THE YEAR IT DOESN’T!!   As if out of nowhere, your brand doesn’t just decline in popularity, it plummets!  The reason your customer’s give: your juice isn’t anything special, it’s like everyone else’s.

What happened?  Didn’t you diligently conduct those covert taste tests?  Didn’t the participants tell you there was no difference between the old and new formulas?  WERE THEY LIARS?

Desperately you try and claw your brand back to the top of the category, but even with new IMPROVED changes to the juice formula, it’s too late.  Your customer’s no longer associate your brand with a premium product.

This story illustrates Charles Handy’s concept of strategic drift.  After just 10 years of implementing imperceptible “operational efficiencies” based on the math, our friends in the accounting department have taken grand dad’s winning formula and made it just 80% of what it used to be,  No wonder your customers have abandoned your once successful company.

But what about those liars in the taste tests?

Actually, they really weren’t liars.  After the first year, the annual taste tests compared the new version of the juice with the PREVIOUS year’s and never the ORIGINAL.  That’s why the tasters never noticed much of a difference.  (see table below) 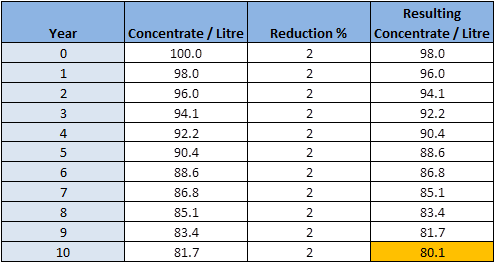 This is very similar to what happened to the Detroit car manufacturer’s in the 1980s, and the major mobile phone manufacturer’s prior to the introduction of the smartphone, and then again when generic smartphone manufacturers got hit with Apple’s iPhone.  By not innovating, and focusing more on maximizing profits than what the customer wanted from the product, eventually, all the offerings became the same.

A brand is about clear differentiation from competitive offerings.  If you create products that ignite desire first, the math will follow.