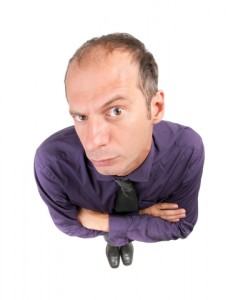 We all have to sell ourselves and our ideas, whether it is to a new boss, a prospective customer, or a potential mate. Conventional wisdom tells us to infuse our presentation with a strong peppering of our accomplishments. Our track record will be persuasive enough to tip the decision in our favor!  However, in a recent Journal of Personality and Social Psychology paper, a team of researchers led by Zakary Tormala of Stanford found that this conventional wisdom may not be the best way forward.

In a series of experiments, the team found that future potential was a much more powerful persuader than track record.

The researchers conducted studies with hundreds of subjects over 8 separate hypothetical situations. In one scenario, they asked the participants to play the role of an NBA coach evaluating a new player for their team. Half of the study participants were given five years of the player’s historical stats, the other half were given 5 years of the player’s future potential statistics in the league. Both sides were then asked what they would pay that player in their sixth year. The would be coaches who only saw the “future potential” stats of their player were willing to give him a million dollars more in salary ($5.25 vs. $4.26) than the coaches who saw an established five year track record. (People really do buy into your future!)

In another study they asked people to evaluate the performance of two job candidates. One candidate had significant career experience for the job they were applying for, as well as high scores on a leadership achievement test. The second candidate had no related job experience, but scored highly on a test of leadership POTENTIAL. Guess who they chose?  By a wide margin, most believed the candidate with the leadership potential would be the best fit for the firm. As well, even though most agreed that the first candidate had the better resume, they still favoured the one with the future potential.

The researchers also conducted other scenarios involving preferences for artists, restaurants, and even a comedian as the subject matter. Time and again, the vast preference was for the one with the future potential over the competitor’s track record.

Some warnings. The candidate with the future potential needs to have strong evidence to back him up. With scant or no strong evidence, people chose the proven track record over future potential. Also, we need to keep in mind that in all of the above examples the candidates were being promoted by a third party. Blatant self promotion may not work nearly as well as having a sponsor do it for you.

So, when pitching that new deal, or that prospective mate, try highlighting future potential in addition to a strong track record. It may make the difference in edging out the competition.