… or why mirroring your client is a power persuasion tactic

Mimicry, the act of copying or mirroring someone else’s speech, gestures, or physical movements, is a natural part of human conversation. An example is when a person touches their face while talking, and the person listening also unconsciously touches their face. Mimicry can also mean mirroring the same posture as the other person, or repeating their words back to them. In fact, when people mimic each other in social interactions, studies have shown that this increases likability, rapport, and the general bond between them. It even works between strangers.

With these things in mind, researchers Rick B. van Baaren, Rob W. Holland, Bregje Steenaert, and Ad van Knippenberg, of the University of Nijmegen, in the Netherlands, conducted two experiments in order to test if mimicry could be used to strategically increase a waitress’s tips. The researchers theorized that if mimicry increases the effectiveness of positive social interactions, that it might also increase feelings of benevolence and generosity in the people being mimicked. If waitresses verbally mimicked their customers by repeating their orders, the researchers proposed that they would receive larger tips from these customers. It was also supposed that customers that were not verbally mimicked would not leave larger than average tips. 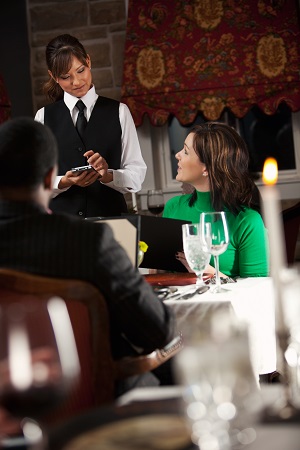 In the first experiment, a waitress served 60 groups of customers. She greeted each group, took them to their tables, provided them with menus and cutlery, and then took their orders. For 30 of these groups, she verbally mimicked their orders by repeating them back word-for-word. For the other 30 groups, she did not repeat the customers’ orders, instead only giving them verbal feedback communicating that she understood what they wanted by saying “okay!” or ‘‘coming up!’’. The rest of her behavior remained the same for all 60 groups. Note that none of the customer groups were aware of the experiment, and all were randomly assigned to either the mimicking or non-mimicking group.

What Were the Results?

The results of the first experiment clearly showed that when the waitress mimicked her customers she received tips more often (81% vs. 61%) and the size of tip was on average 69% percent larger.

However, the researchers were careful to note a few caveats. Limitations included the fact that the waitress was aware of the purpose of the experiment, which might have influenced her behavior positively in other ways. Another limitation was that the use of mimicry might have caused the customers to simply feel that their order was understood better, rather than increase any positive benevolence toward the waitress.

A second experiment was conducted which repeated the methods of the first while addressing many of its limitations. This time two waitresses were used for the experiment, one of whom was unaware of the experiment’s purpose. The researchers also established a baseline for the average tips that the 2nd “unaware” waitress was used to receiving in the weeks prior to the start of the experiment.

In this second experiment, the waitresses wrote down every order in addition to verbally repeating them back word-for-word to the mimicry group. For the non-mimicked groups, they did not repeat the customers’ orders, instead only giving them verbal feedback communicating that she understood what they wanted (just like in experiment 1) by saying “okay!” or ‘‘coming up!’’. Each waitress served 60 groups, divided into mimicked and non-mimicked tests.

The findings from experiment two showed that the mimicked group gave a larger average tip (2X more on average) and gave more often (78% vs. 52%) than the non-mimicry group. For the “unaware” waitress, this was especially true. She received almost 2.4X more tip money when she mimicked her customers than when she did not. This positive effect also held true when compared to her prior baseline. The results were strong enough from both experiments that the researchers concluded that mimicry increases tip size, and that people who are mimicked become more generous toward their mimickers.

mimicry is a proven way to increase feelings of liking in people who are interacting with you.

Mimicry is a proven way to increase feelings of liking in people who are interacting with you. The researchers even suggest that mimicking can be used strategically in situations where quick rapport needs to be built – people in service industries, the medical field, counseling, and social work might benefit from using it as a technique to build trust and strengthen initial bonds with their clients, customers, or patients.

There are many ways you can sincerely and positively mimic your clients and prospects. Here are some examples:

As long as it is genuine, mimicry can be a highly effective persuasion tool.