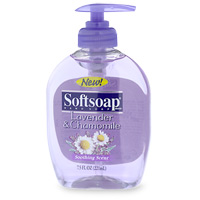 William Sheppard was first issued a patent for liquid soap in 1865. His discovery was that regular soap mixed with liberal quantities of hartshorn resulted in a soap derivative that had the consistency of a thick honey or molasses. The new product was soon found in many public facilities, but never found mass acceptance in the home. This all changed in the 1970’s when the Minnetonka corporation offered a modern version of the soap called Crème Soap on Tap in decorative ceramic containers through specialty boutique shops.

The product gained almost immediate market acceptance, and in the 1980’s Minnetonka created a mass market version of the product in a unique pump bottle dispenser which they named Softsoap. The product flew off the shelves, and although they were happy, Minnetonka management was also very nervous.

The hand soap market was dominated by very large players such as Procter & Gamble, Lever Brothers, Dial, and Colgate-Palmolive, who wouldn’t take kindly to a new upstart threatening to steal their market share. Minnetonka had a history of innovation, and successfully launched toothpaste brands, as well as the perfumes Obsession and Eternity. But in the 1970s, the company had launched a line of fruit shampoos that quickly threatened the market prospects of established player’s like P&G’s Clairol division which swiftly countered with their own line of fruit shampoos. Clairol quickly knocked Minnetonka’s shampoos off the retail shelves, and Minnetonka management did not want a repeat performance of that defeat.

The complication was that NOTHING of the soap or its production was patentable. The problem of protecting this new product’s life on the shelf seemed to be insurmountable, until management realized one simple thing. One of the key aspects of the Softsoap experience was the dispensing of the soap itself through the bottle’s pump. The patent for the pump was closely held, and there were only two manufacturers for the device. In a bold and audacious move, Minnetonka bought up nearly 100,000,000 units of future production of the dispensing pumps, basically betting the entire company on the hopes that Softsoap would be a stellar success.

Without access to the pumps, competitors could not launch a rival product for nearly two years, thus giving Softsoap the lead time it needed to establish itself. The Softsoap brand was such a success that Colgate-Palmolive bought the division in 1987 for $61 million.

Small business marketing is not wholesale different from big business marketing, and both are first and foremost about strategy. In this case, the winning strategic move was to clear the landscape of all competitors. By locking up key resources, Minnetonka was able to do just that.

What resources can you lock up?