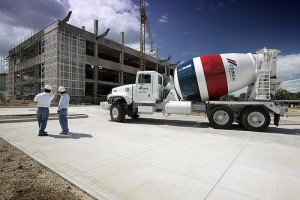 “You, yes you, have the personality of wet concrete.” Obviously, anyone saying this to you is clearly not a friend, because the common perception is that wet concrete is boring, lifeless, and dull. But imagine if you had the job of trying to sell this stodgy, uninteresting, but absolutely essential, building material. How would you do it?

Founded in Mexico in 1906, Cemex is a global leader in the building materials industry. It is also one of the most innovative companies in the world, despite operating in the very un-sexy core business of ready mixed concrete.

Construction projects are often plagued with delays like the weather, labor disputes, and numerous other factors which push each sequential supplier and project contractor further askew in their own scheduling. Add to this the fact that inputs like ready mixed concrete have very short shelf live, and you will readily see that delays can cost builders a considerable amount of money, aggravation, and inconvenience. Some estimates place the amount of cancelled concrete orders as high as 50% on the prescribed delivery day due to construction delays.

…concrete is a commodity, but TIME is a precious resource.

In the construction industry concrete is a commodity, but TIME is a precious resource. Being behind schedule can easily crush a project’s economics and place it into an irrecoverable financial sinkhole.

Sensing an opportunity, Cemex set about to create a strategy that capitalized on this insight. Beginning in the late 1980’s in its home market of Mexico, the company launched a satellite communications system called CemexNet. This was a vital foundation of its infrastructure that allowed the company to control and coordinate its production facilities from a central clearinghouse in real-time. In the 1990’s, it aggressively moved to install GPS tracking in all of its trucks. A central dispatch center now knew precisely where each of its trucks were, local traffic conditions, cancelled orders, work sites that were ahead of schedule, and inventory levels and production conditions at all of its plants.

During this time, Cemex sent teams to study how parcel delivery companies, pizza delivery firms, and emergency response crews handled logistical complexities. They even studied the foraging patterns of ant colonies to glean how mother nature handled the unpredictable to and fro of supply and demand.

… the company optimized its fleet to deliver WHEN the concrete was needed, and not just what was ordered.

With this understanding, and backed by the new technology, the company optimized its fleet to deliver WHEN the concrete was needed, and not just what was ordered. The result was that a normal 3 hour window for concrete delivery at a work site could now be reduced to as little as 20 minutes. Beyond this, the company dramatically reduced wasted concrete, and used 35% fewer trucks. Cemex is now one of the world’s largest companies in the building materials industry.

By recognizing that what its customers REALLY WANTED was a flexible and predictable delivery window, Cemex was able to move beyond its core-product and concretely differentiate itself from its competitors.